Notre Dame, in sight and sound

Shortly before my recent trip to Paris I was surprised and honored to receive a note from Des Coulam, author of the wonderful Soundlandscapes blog. “I thought it would be great if we could do something together for joint publication on our blogs,” he wrote.

Des’ idea was simple enough: I would choose a place and talk about it, and he would record it. It took no effort to choose my place. “I’d love to explore the area around Notre Dame with you,” I wrote back.

I visited Notre Dame for the first time in 1997, as a reluctant traveler who had been brought to Paris against her will. I am not a devout person. But as I stood before that façade, I was profoundly moved.

I’ve been back nine more times since that first trip. And although I’ve discovered many other special, beautiful places in Paris, one of my first stops is always Notre Dame.

It still evokes strong emotions, as you’ll hear in my interview with Des. And as you’ll also hear, I’m still struggling to explain what this place means to me, and why.

There are lots of details I wish I’d included in my interview. Fortunately, I have the opportunity to add them here — along with a few photos. So, with no further ado, I present to you La Cathédrale Notre Dame de Paris.

The west façade is where my love affair with Notre Dame started. Completed in about 1250, this ornate entry was built in an age when almost everyone was illiterate. That’s why its lessons are told in stone, from the birth of Jesus to Satan’s eternal damnation. 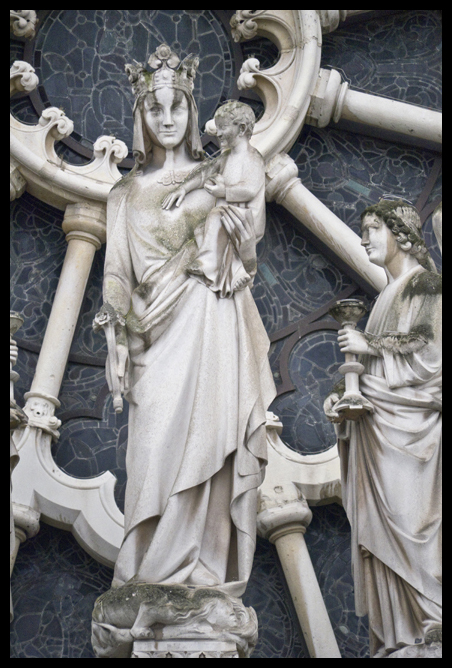 I especially love the depiction of St. Denis, the third-Century bishop who was martyred by beheading. As the story goes, he picked up his severed head and walked about five miles — while continuing to deliver what must have been the most disconcerting sermon in history.

According to Wikipedia, Denis is “one of many cephalophores in hagiology.” I love this factoid! But mostly I like his calm expression, and the equally mellow angels who flank him.

At the base of the west façade are three gloriously huge, gloriously ornate doors.

The ironwork was done with such speed and skill that the blacksmith was suspected of having made a bargain with Satan. (It probably didn’t help that his name was Biscornet, which translates roughly as “two horns.”) According to the legend, poor Biscornet was so crushed by the accusations that he died of a broken heart.

No matter how crowded the entrance and exit may be, I always pause for a moment to touch the ancient door knocker. How many others have done the same, over the centuries?

If you stand in front of the cathedral and look down, you’ll find the “kilometer zero” marker. Functionally, this brass marker is the point from which all highway-travel distances in France are measured. But some say that standing on this spot ensures you will one day return to Paris. I’m not particularly superstitious … but still, I always plant my feet here — just in case.

And if you stand in front of the cathedral and look up, you’ll see the famous “gargoyles.” But the critters we most associate with Notre Dame aren’t gargoyles at all. What’s more, they’re a fairly recent (mid-1800s) addition, part of architect Eugène Viollet-le-Duc’s restoration. It makes me smile just the same to look up at their grimacing faces.

The view from the top is stunning, too. 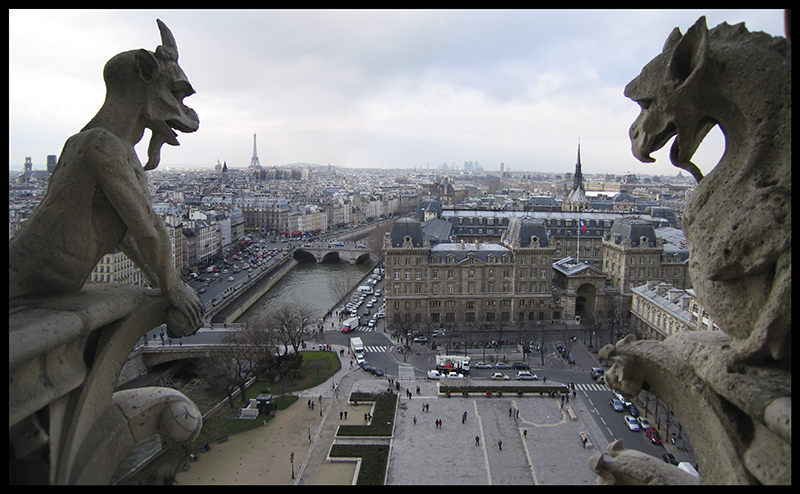 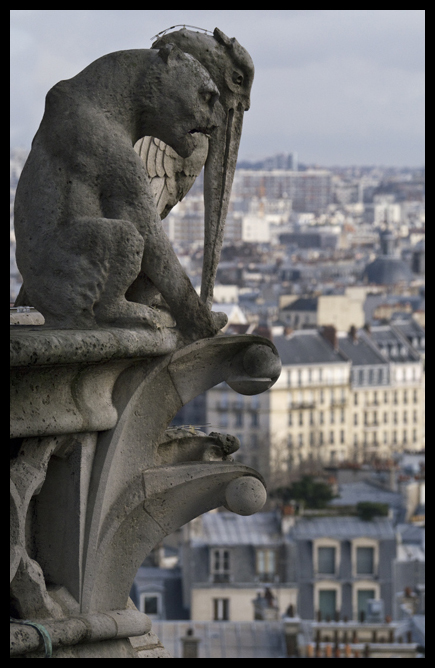 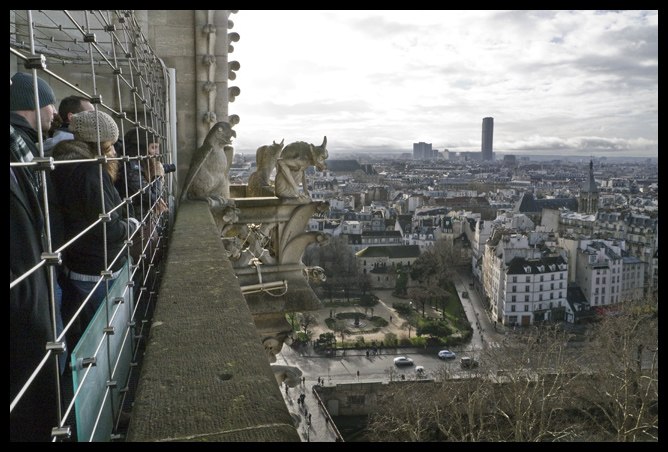 One last thought about Notre Dame’s west façade: It’s a photographer’s dream! I walked past it perhaps 10 times a day when I was lodging off the Quai Montebello — and every time, the light was different. 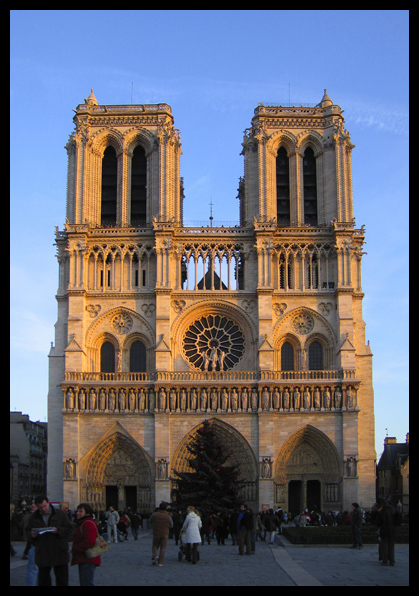 A connection to centuries of history

If there was a theme to my interview with Des, it was this: I feel as if I’m a part of history when I visit Notre Dame. This spot — which is still the heart of Paris — is where the Parisii first settled during the Stone Age.

This is also where the Parisii fought off Julius Caesar — and where they eventually (and perhaps inevitably) became part of the Roman Empire, residents of a city renamed Lutetia. Centuries later, Charlemagne ruled an empire of his own from this spot. His statue still rides triumphantly in front of Notre Dame. 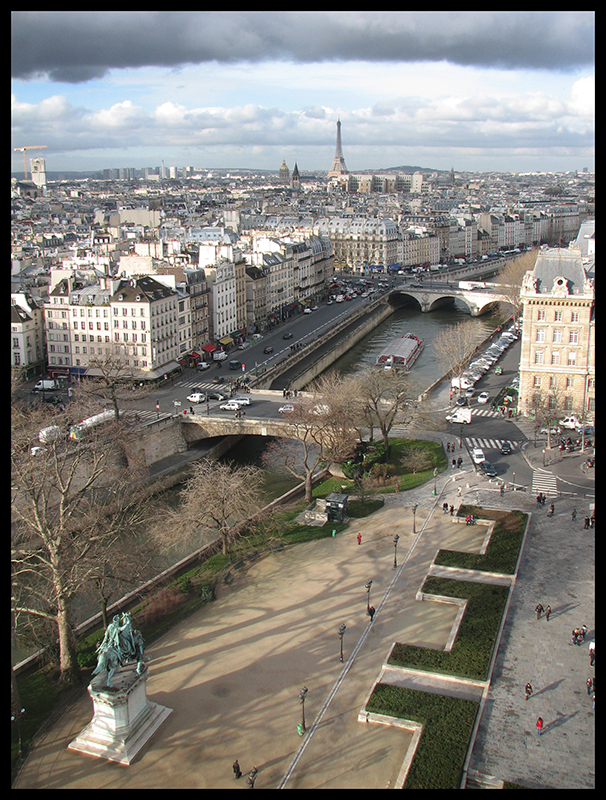 This is the spot where plague victims came to pray, where revolutionaries went on a rampage, where Napoleon crowned himself emperor, and where Baron Haussmann razed an entire neighborhood to create the view we enjoy today.

During my most recent visit, Notre Dame had again been subjected to a visionary’s grand plan — this time, a bizarre installation designed to celebrate the cathedral’s 850th anniversary. How this blue-and-battleship-gray monstrosity might “enhance” anyone’s visit was lost on me. 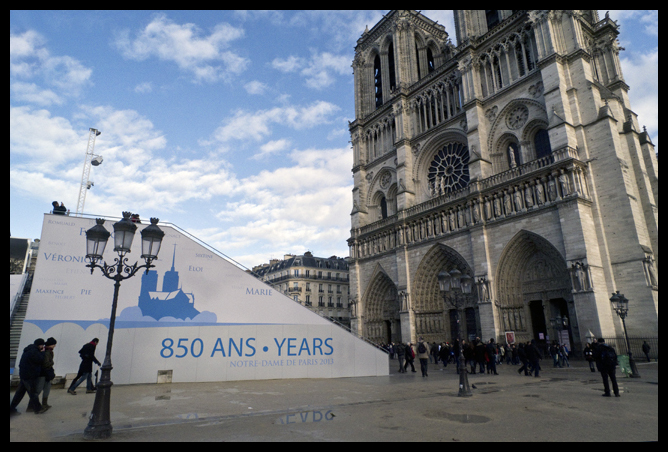 But at least I had the privilege of being there to see the blessing of the new bells. 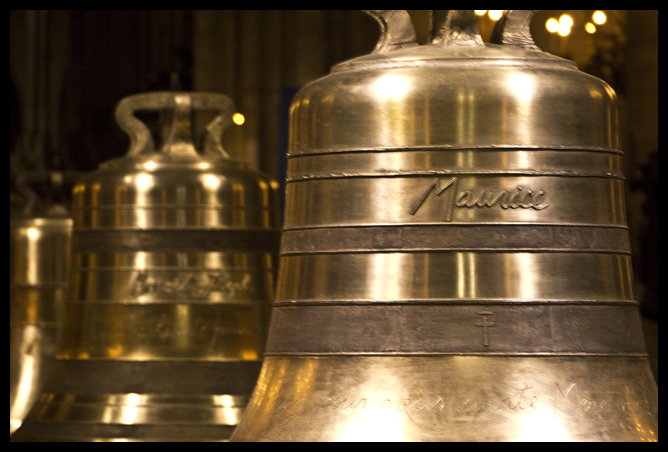 Notre Dame has been the site of countless baptisms, weddings and funerals — a centuries-old repository of human hope, fear, joy and grief.

And as I stand in front of this magnificent old church, I feel that my small, insignificant existence becomes for a moment a tiny thread in the rich tapestry of human history and emotion that have been woven together in this place.

For a moment I feel that I’m part of something important and enduring.

I extend a very heartfelt thank you to Des Coulam for inspiring this post, and for forever changing how I perceive and experience Paris. I’ll write more about that soon. But in the meantime, I encourage you to visit his blog. I think he’ll enrich your world, too.