An adventure in recorded sound

It all started with an old record. Jalal Aro wanted to hear it, but couldn’t — not without the right machine. The quest to find that machine sparked a love affair that has bloomed into a business, and one of Paris’ most fascinating private museums.

I visited Jalal recently with my friend Des, author of the marvelous Soundlandscapes blog. As we walked along the Boulevard de Rochechouart, Des pointed to a succession of shops devoted entirely to musical instruments and sound recording.

It was a fitting location, Des explained, because this used to be one of Paris’ biggest entertainment districts. Looking at this mainly commercial street I struggled to imagine it full of cabarets and theaters, music spilling into the streets. But a quick Wikipedia search confirmed the boulevard’s pedigree: It was home to Rodolphe Salis’ famous Chat Noir cabaret, among many others. 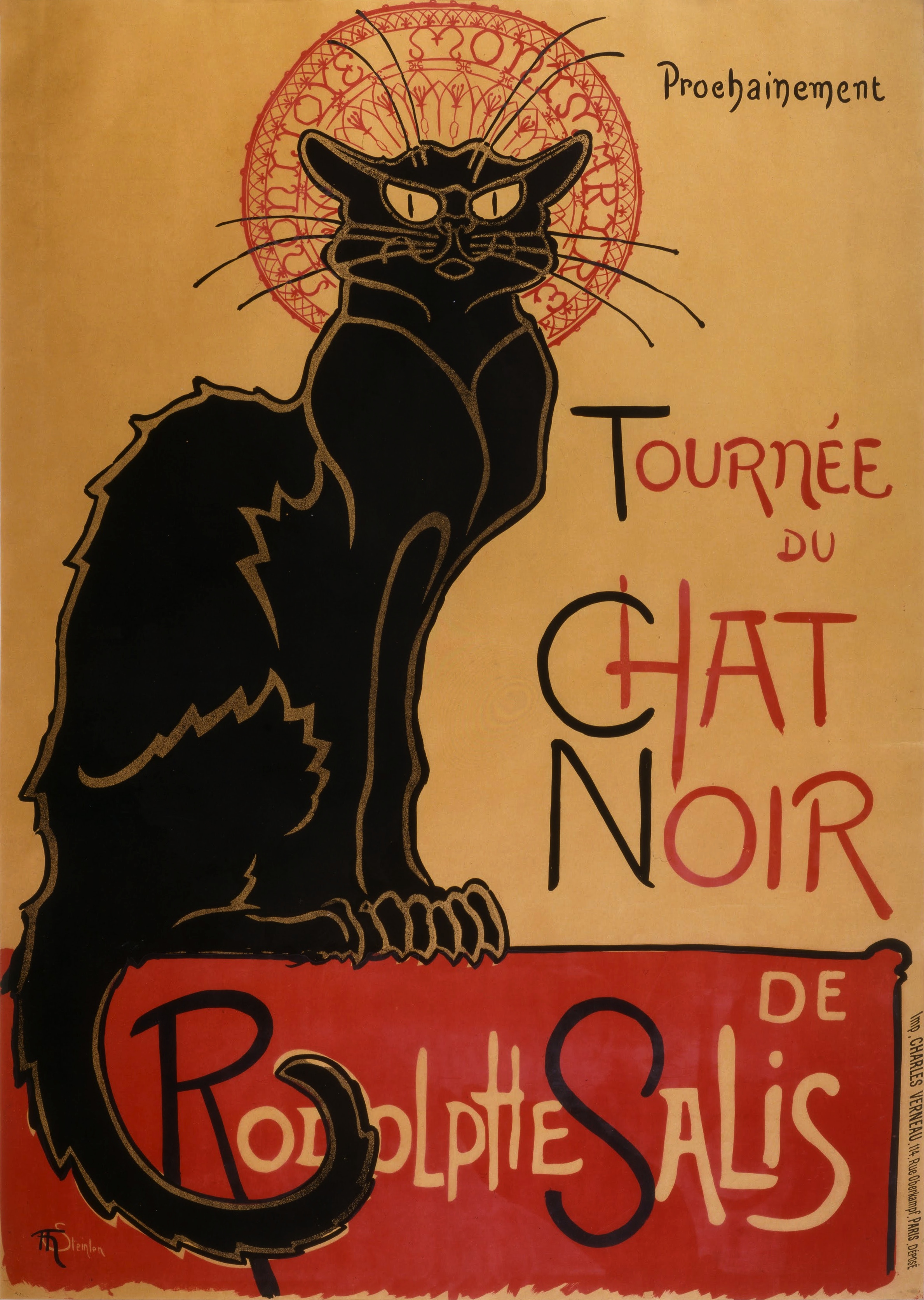 Théophile Steinlein’s original advertising poster for the cabaret, via Wikipedia.

I felt a twinge of nostalgia when I considered how much Montmarte has changed since those wild and heady artistic days. But that colorful past hasn’t entirely vanished, I soon discovered: It’s still very much alive again inside Jalal’s Phonogalerie shop.

At first glance it looked a bit jumbled, as if I’d stumbled into someone’s attic. 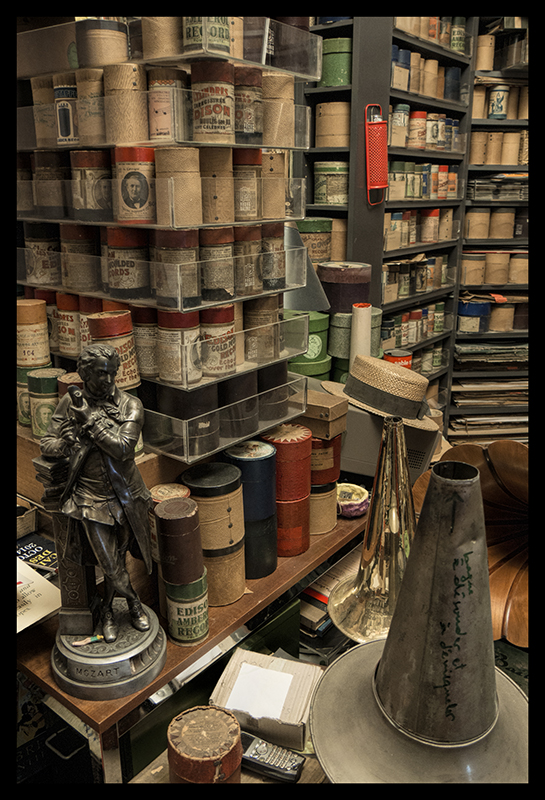 But after a moment a sense of order emerged. One room contained shelves full of records, all alphabetized in neat rows. Other shelves housed antique cylinders, while another room seemed devoted almost entirely to amplification horns. Amid it all were dozens of old recorders and players of various vintages. 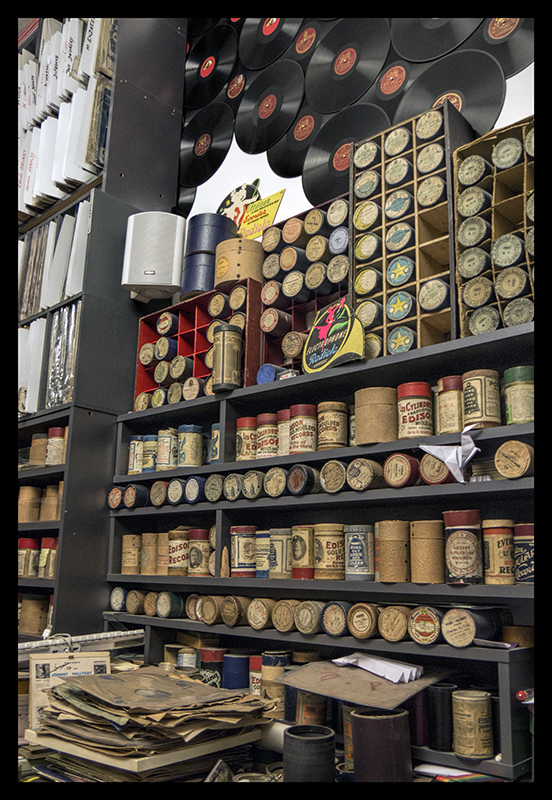 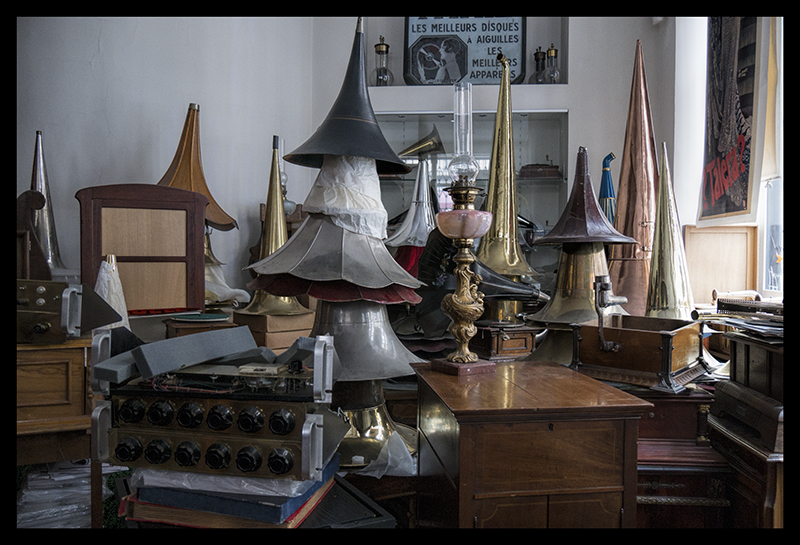 I asked Jalal where he got these old machines. “Many from collectors,” he said. Collections are being broken up as a new generation inherits them and doesn’t know what to do with them. A few phonographs end up in flea markets; others at auction.

“And what do you do with all these machines?” I wondered. Some he lovingly restores to their original condition for sale or display in his museum. Others he rents out as film props, Jalal said. (You can spot a couple of Jalal’s machines in Midnight in Paris and Inglorious Basterds.)

“But for me it’s not just about the machine,” he added. “It’s about the complete experience.” That means also listening to the music, as well as collecting the posters and memorabilia from the earliest years of recorded sound.

You can have that “complete experience” for yourself right around the corner from Jalal’s shop, in the Phono Museum. Here you’ll find some of the best specimens Jalal has collected and restored from every era — in total, more than 250 machines representing 140 years of recorded sound. AND EVERY SINGLE DEVICE WORKS. 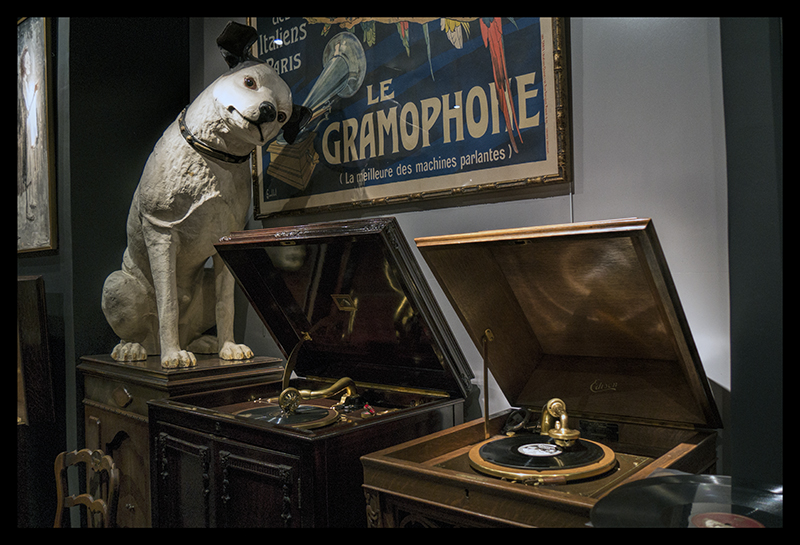 Looking at the sheer variety and complexity of the machines, it boggled my mind that Jalal would know how to fix them all. The ingenuity of some of these devices was dazzling!

For institutions and individuals alike, the early phonographs represented a significant investment — so they were crafted to last, with the same standards you’d expect of fine furniture. Many were outright works of art.

But the real thrill for me happened when Jalal’s wife Charlotte fired up the first machine — a double-needled contraption intended for use in a music hall. I smiled when I imagined couples, dressed in their Sunday best, dancing to this frenetic music. It must have seemed like magic at the time. 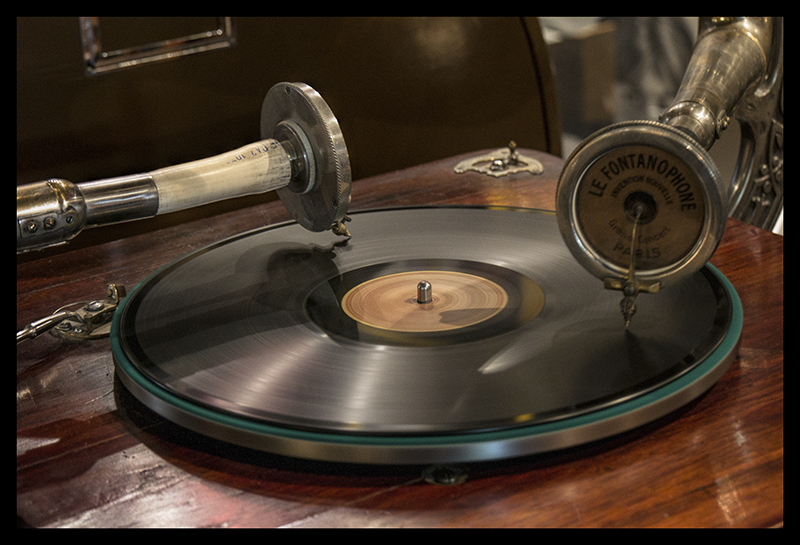 It still seems like magic, in fact. It’s magic to be able to hear some of the first sounds ever recorded on an original Graphophone …

… or to hear music amplified on a paper speaker.

Or to listen to an original recording of Enrico Caruso’s voice. This last one moved me particularly after Charlotte explained how the recording had been made: Caruso had literally leaned into a cone that captured the vibrations and translated them into grooves on a disc. Only a few copies could be made during each session, so he had to sing the same song over and over to mass-produce discs.

In all, he made some 260 commercially released recordings between 1900 and 1920, to such success that he became one of the first global musical celebrities. And all of this history was encapsulated in this single, shining moment:

I could go on about the edible chocolate records … 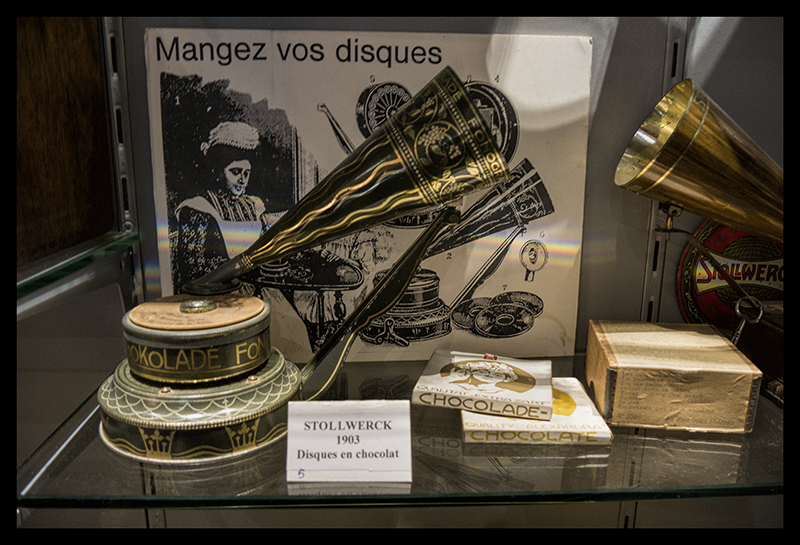 … and the thrill of seeing the RCA Victor dog “live”…

… and the cool neon jukebox …

… and the world’s first talking doll. All of which still work!

But instead I’ll suggest that if you’re ever in Paris, you visit the museum for yourself. Seeing — and hearing — so many of these machines together is a one-of-a-kind experience, and not to be missed. It truly does transport you back to an era when music was magic.

The man behind the magic: Jalal, right, shows a museum visitor how one of Edison’s original batteries worked.

One final note: The Phono Museum is self-funded, so its existence depends on admission fees and donations. If you can’t go but would still like to contribute, you can do so here.

My enormous thanks go out to Des for arranging my visit, and to Jalal and Charlotte for their kind hospitality.

Jalal has written a brief history of recorded sound (in French), which you can read here.

Text, images, and recordings © Heather Munro. Please do not download without express permission.