This is the last installment of my husband’s and my trip with our dear friend Des to Mont St. Michel, off France’s Normandy coast. (In Part 1 we almost didn’t get there, and in Part 2 we marveled at the views and stayed the night. You can also read Des’ own account of the trip here.)

Now it’s a mild Wednesday morning in September — and I’m racing to see as much as possible before we have to leave the island at 9 a.m.

I sprang out of bed at 6:15 and checked the weather: Cloudy, but no rain. I pulled on my boots and meandered in the dark down the mountain, past the cemetery I’d seen the day before.

If there were ghosts here, they were as peaceful as their surroundings.

But it was a different story on the main street, where workers were delivering goods for the day ahead and hauling away empty wine bottles. The noise was a sharp contrast to the silence near the cemetery only moments earlier. 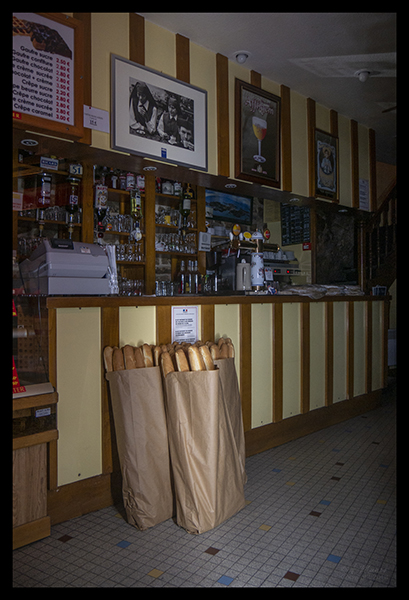 I walked through the main gate and onto the causeway.

In the 45 minutes I spent watching the sunrise, I was struck by how often the light changed. (As you can see, Normandy is famous for its fickle weather.) 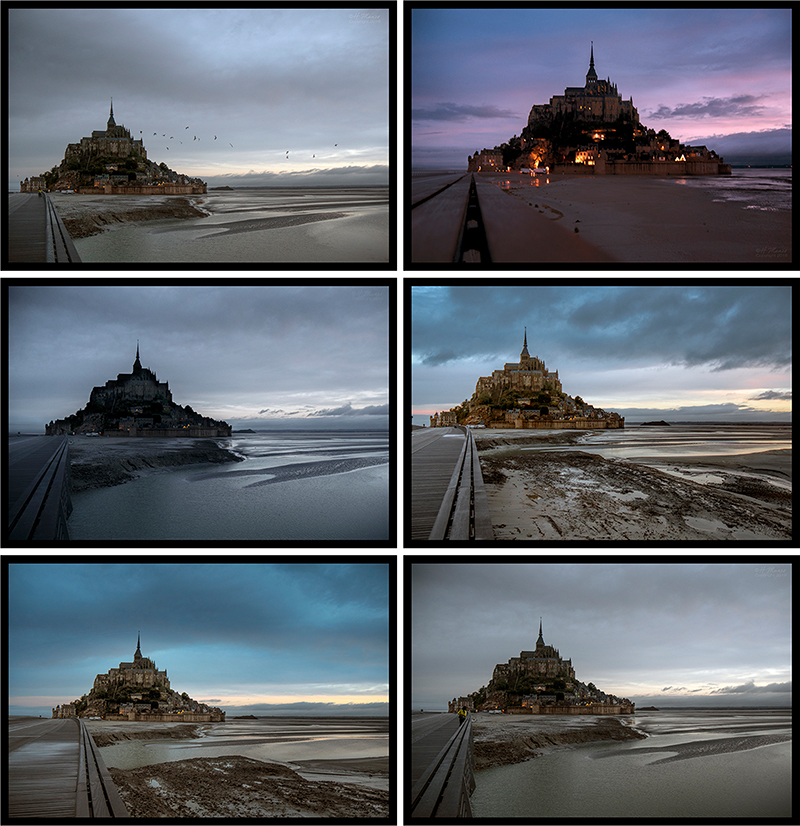 My only companions were a couple of passing tourists and an egret. It was so quiet that I could literally hear the tide coming in. 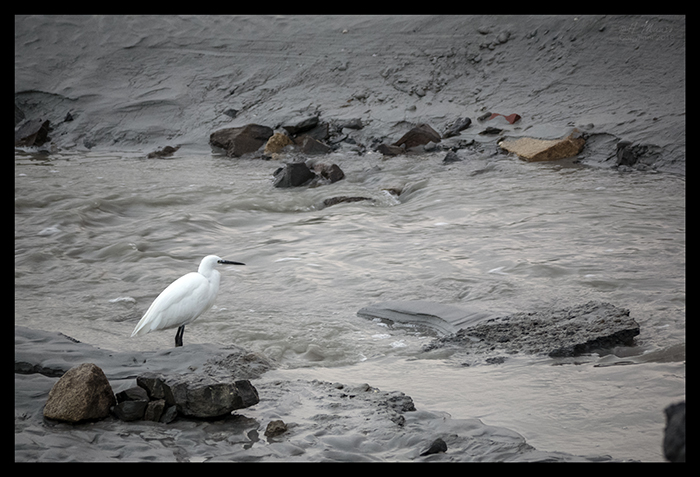 I was reluctant to leave my perch — but it was 8 a.m. already, and we had to be out by 9. On the way back to the island I decided to wander off the causeway just a bit, and walk on the same beach millions of pilgrims have braved over the centuries.

My adventure was short-lived, alas: It took just five steps to land in quicksand. (It really does feel like it’s pulling you in.)

I was rattled as I half-ran, half-walked up those interminable flights of stairs. Maybe it was because I was in such a rush that I noticed a shiny snail making his way over a stone wall.

It was probably just my imagination, but he seemed as curious about me as I did about him. 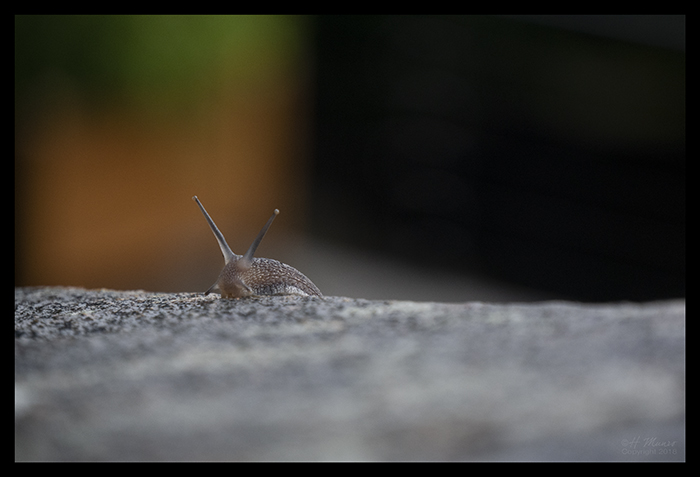 An aside: Imagine traveling all the way to Mont St. Michel, only to become obsessed with a snail.

Back in the room my husband and I weaved and bobbed like a couple of boxers (the fighting kind, not the shorts) as we tried to pack in the cramped space. The bathroom had one of those ridiculous showers with the glass half-door. WHY??!!!

In spite of my great care, I still soaked the floor somehow. Gah. My beloved left me to the flood remediation and wandered off to meet Des.

Have you ever noticed how sometimes your brain gets scrambled when you’re in a hurry? That happened to me — and in spite of the island having only one main road, I still managed to get lost.

I asked directions of a man who was sweeping. After much pointing and waving of arms, he directed me to a shortcut. (Full disclosure: I took this photo the day before, and in a different spot. But now you have a mental picture of the sweeping man.)

I was dismayed to discover that the alleged alley was more of a rain spout, really. (Did he think I’d slide down the drainage ditch with my luggage, and drop one story onto the road below?)

Instinct told me to keep walking until I found a set of stairs. Then another. And another. As I turned left onto the last steep flight and descended onto the main street, a crowd of Chinese tourists parted to let me through. A few were madly snapping photos of the red-faced, sweaty American as she wobbled down the last few steps.

They clapped when I finally reached the bottom, and we all had a good laugh. I love it when humor transcends culture and language …

My husband and Des were waiting just a few feet away. We walked through the huge main gate one last time, toward the shuttle.

I couldn’t believe how high the tide had gotten! The mud flat where I’d gotten stuck only 90 minutes earlier was now under three feet of briny water. Here’s a parting glimpse through the window:

While we waited for the bus back to Rennes, a young woman with a backpack approached us. She had walked all the way from Le Mans and had spent a couple of nights at Mont St. Michel, she said.

This was her third pilgrimage. “It changes your life,” she told us in English. She was born in Lithuania but had studied in London and now lived in Rennes. “Une citoyenne du Monde,” I joked. A citizen of the world.

She lamented how commercialized the pilgrim route has become, even since her first pilgrimage to Santiago de Compostela in 2007. It used to be you paid what you could, she said, but now by law it’s a minimum of five euros per night.

Likewise, Mont St. Michel used to shelter mostly pilgrims, but now only six such rooms remain. She also contrasted how many pensiones there were in Spain, compared to the few in France. On this trip she’d brought a tent, she told us, and had camped along the way.

I gladly acquiesced when she asked me to watch her bag. It was the first time I’d seen a real coquille St. Jacques — the pilgrim’s symbol. I loved her hand-carved walking stick, too.

Across the street, three other tourists missed the whole exchange because they were engrossed in their phones. 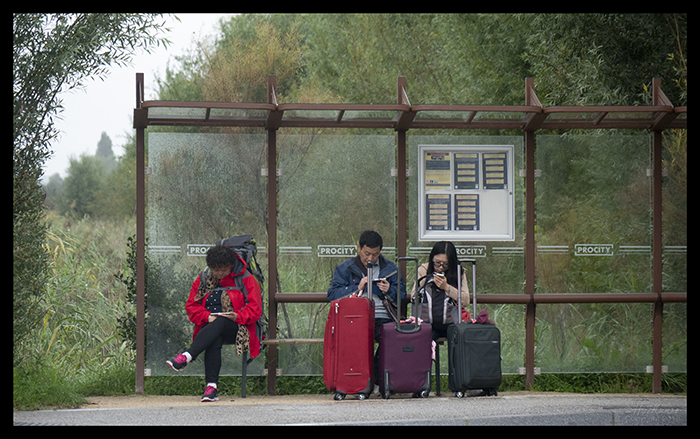 The bus ride to Rennes went quickly as we passed Pontorson and a dozen other little towns, each with its own diminutive church and wee cemetery.

The other tourists missed that, too. 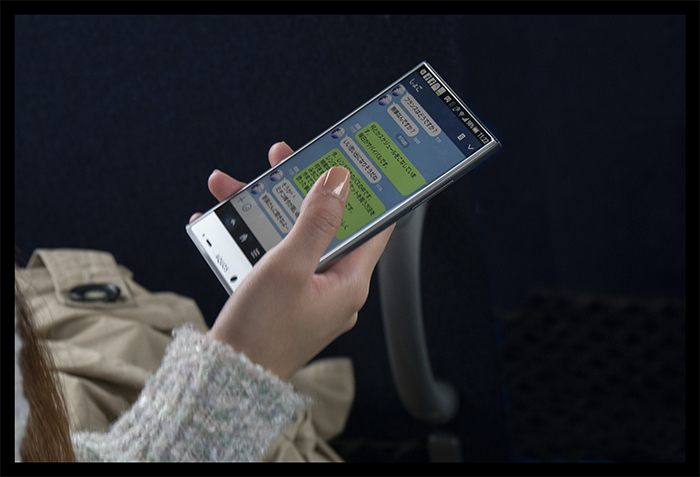 Almost four years later I’m left with only fleeting impressions of Mont St. Michel: the mossy roofs, the masons’ initials on the stones they had cut, the haphazard foundations, the stone pillars’ precision … 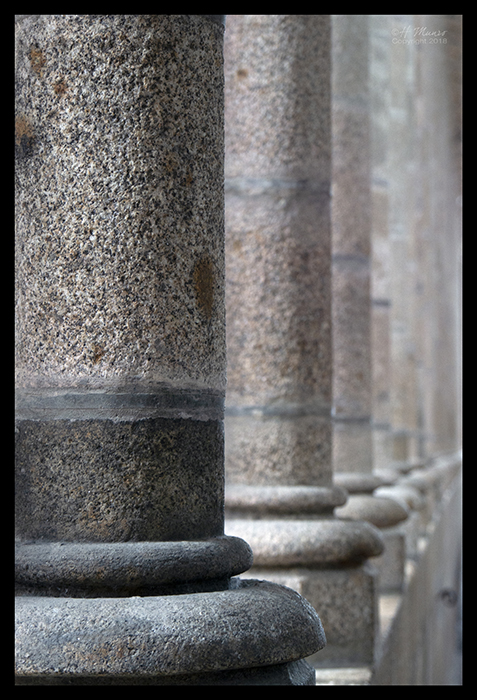 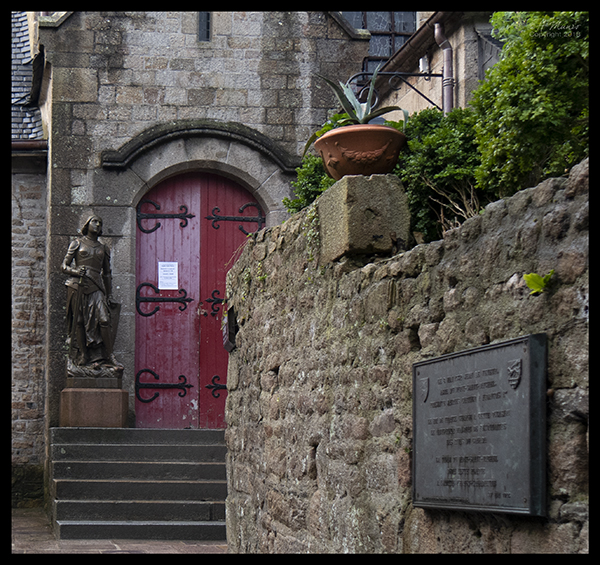 But the most lingering impression of all is one of having gone back in time.

If you’d like to go even further back in time, check out Victor Tribunsky’s marvelous post about the pre-Christian history of this mountain, complete with his own wonderful photos.

We’ll leave it there for now …

… but I promise to continue this adventure soon as we go on the road to Rouen.

Text and all images © Heather Munro.