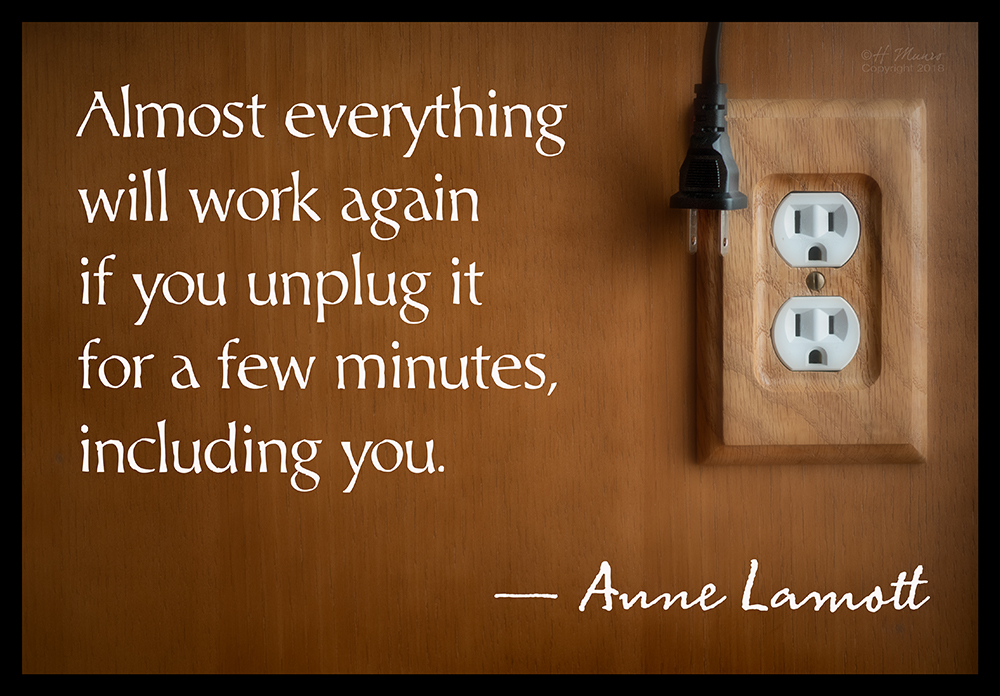 “Almost everything will work again if you unplug it for a few minutes, including you.”  — Anne Lamott

I didn’t set out to unplug this summer. It happened organically, thanks to meandering morning walks that took longer than expected — and deadlines that came up faster than expected, too.

There’s been some photography and a bit of blogging. Mostly I’ve spent the summer reading, though, sometimes devouring whole books in one bite.

Here are 10 of my favorites; maybe one of them will speak to you as well. (If my selections seem a bit eclectic, blame my neighbors’ ubiquitous Little Free Libraries.)

A Whole Life by Robert Seethaler
“Luminous.” That’s the word that comes to mind again and again for this poetry disguised as a novel. The chapters of Andreas Eggers’s story accumulate as gently as the snow in his native Alps. But then it all crashes down like an avalanche and you stumble away, dazed and transformed. Few books have stuck with me like this simple story of a humble life.

Bird by Bird: Some Instructions on Writing and Life by Anne Lamott
This classic is billed as a “must-read” for all writers, but I’d expand that to include all living human beings. It’s full of fantastic advice (see the top of the post) — and it somehow radiates hope and encouragement, too. I expect it will remain the most dog-eared and highlighted book on my shelf for a long time.

Blue Highways by William Least Heat-Moon
If you’re distressed about the state of the American union, pick up this book. It was born in the aftermath of the author’s divorce — which is maybe why his longing for understanding and connection seeps through in every sentence. He’s a master of written dialect, too, so don’t be surprised if you find yourself calling your car a “sumbich.”

City of Thieves by David Benioff
This book is so close to being a screenplay that you can almost picture the camera directions. So what? It’s meticulously researched and richly imagined, complete with a heartbreaking ending. One caveat: The author is also a Game of Thrones co-creator, so expect lots of sex and violence and blood and transgender chickens. (Yes, you read that right.)

Department of Speculation by Jenny Offill
I’ve never read anything like this one-sitting gem. At first blush it’s a collection of random thoughts — quotes, memories, casual observations — that read like entries from a diary. But then they coalesce into a story of friendship, marriage, and betrayal. No new ground is broken here, but the ingenuity of the narrative structure makes it well worth digging into.

The Goldfinch by Donna Tartt
This sprawling, 775-page novel won the 2014 Pulitzer Prize for fiction. Some friends question whether it deserved the honor, but I couldn’t put it down. Tartt creates vivid characters and then seamlessly weaves their stories together against a backdrop of art theft, antique restoration, drug addiction, Vegas … well, you have to see for yourself!

Lincoln in the Bardo by George Saunders
“What the hell is happening?” It took me about 20 pages to realize that — like Bruce Willis in The Sixth Sense — I had crossed to “the other side.” I can’t say I enjoyed this book per se, but I did love the stunning originality of its narrative device. Plus, I learned a lot about President Abraham Lincoln through his contemporaries’ writings.

Paris Was Ours by Penelope Rowlands
This collection of 32 essays is somewhat uneven in its quality, but I did enjoy learning how these writers came to Paris for the first time, how they were seduced, when they fell in love. As with all love stories, there are bittersweet moments and disappointments. But overall you’re left with a mosaic of fond memories as diverse as the city that inspired them.

The Pearl Diver by Jeff Talarigo
Here is another quiet little book about an ordinary life — this time, a young woman in Japan who is banished to a leper colony in the 1940s. Talarigo’s imagery is so vivid that you can practically hear the surf and smell the brine, but the real protagonist here is the human spirit in all of its relentless tenacity.

Rubicon by Tom Holland
Some academic writers use their prose to belittle your ignorance; others speak to you as an equal and then elevate you with their knowledge. Tom Holland is among the latter. With his crisp writing and dry wit, he has somehow turned the demise of the Roman Republic into a page-turner that makes figures such as Marius and Pompey feel like old friends.

Looking for even more reading inspiration? Here are 101 more books you may enjoy.