Ernest Hemingway worked at the Kansas City Star for only six months, but the newspaper’s style guide forever shaped his writing:

Use short sentences. Use short first paragraphs. Use vigorous English. Be positive, not negative.”

Still, A Moveable Feast didn’t impress me when I read it in high school. The writing seemed simple, almost childlike. “This is literature?” I wondered.

But the economy of Hemingway’s writing struck me when I reread it a few months ago. “This is literature,” I decided.

I’ve spent most of my life wrestling with words — and I’ve lost most of the matches. There are so many ways a writer can go wrong. By getting it wrong, though, I’ve come to appreciate the ways Hemingway got it right.

Love him or loathe him, you can’t argue with Hemingway’s directness. He says what he means, and he doesn’t waste your time. There’s something appealing and even admirable about that in our age of gimmicks and spin.

That’s why I scoffed at the Hemingway Editor. “What a crass, commercial rip-off” I thought, when a friend told me about it. But I changed my tune after I tried it.

In “write” mode, it behaves like any other word-processing program. (Albeit with a more minimalist interface, which I love.) 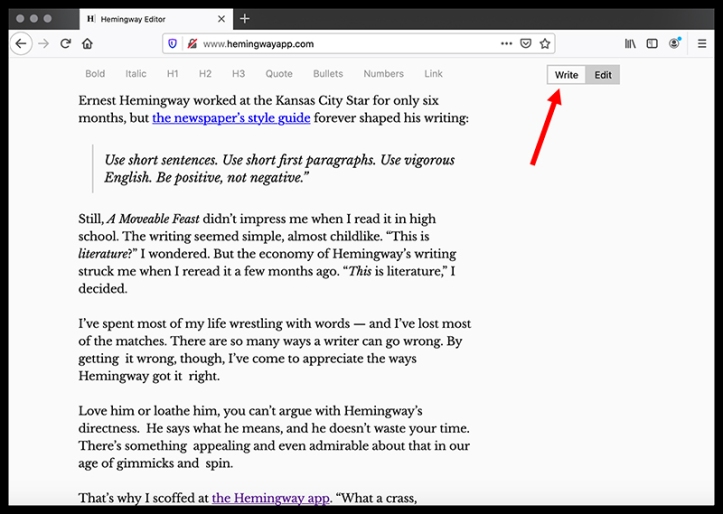 But when you switch into “edit” mode, you get an instant writing coach. See the bar on the right side of the screen? The app provides a readability score, word/character statistics, and several guides to crisper prose. 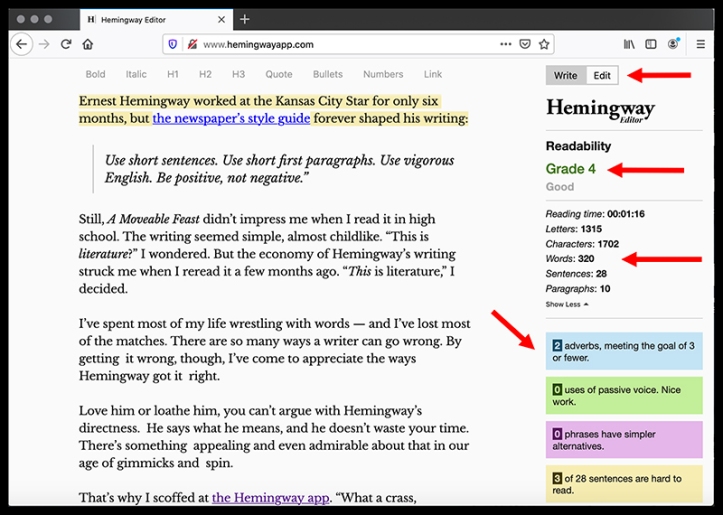 Why don’t you give it a try, too? You can use it for free online — or buy a standalone desktop version for just $19.99.*

For further reading, I also recommend Wikipedia’s Hemingway bio. I had no idea that “… in 1954, while in Africa, Hemingway was almost fatally injured in two successive plane crashes.” He also fought in World War I, saw the Allies land at Normandy, and was present for the liberation of Paris from the Nazis in 1944.

Oh, and he won the Nobel Prize for literature.

* I am not affiliated with the Hemingway Editor, nor do I have a financial interest in it. I just think it’s a useful and effective tool for writers.